Since 2003 Genus Theatre Company has been presenting original, groundbreaking productions that have incorporated both live theatre and integrated film/media elements.  The company has developed a reputation for producing carefully constructed works that are both accessible and provocative.  Recent productions include the original play The 4H Club that was a success at last year’s Neanderthal Arts Festival; Eugene Stickland’s award-winning A Guide to Mourning at Performance Works; and a roving show out of the back of a cube van this summer on downtown streets as part of the City of Vancouver’s Viva Vancouver Festival.  This is Genus’ 5th time participating in Theatre Under the Gun.

Frano Marsic
Frano has been a member of Genus Theatre since 2005.  His experience with the company has seen him work as a performer, writer, director, producer, designer, and training facilitator.  Frano is a graduate of Simon Fraser University, working as a theatre artist and educator.

Kelly Sheridan
A graduate of SFU, Kelly has worked as a producer, writer, director, dramaturg, film-maker and performer with Genus since 2005.  She has been performing professionally since 1990, and has over 80 credits in film, television, theatre and voice-overs.  Most notably, she worked for Mattel 2001-2010 playing the voice of Barbie™ in the majority of their toys and movies. www.kellysheridan.ca.

The Contingency Plan is a contemporary dance collective whose focus is to create and present work that is socially relevant and accessible. We wish to create a dialogue that allows society to examine the world around us and process it through the art of dance. The Contingency Plan is a collective of three contemporary dancers, Vanessa Goodman, Jane Osborne, and Leigha Wald, who met while pursuing degrees in dance at Simon Fraser University. Our goal is to engage audiences with work that is exciting, physical and highly visceral. Our mandate is to integrate communities by creating an opportunity for audiences to fully engage in work that is honest and sincere. As a collective we are committed to the versatility required for contemporary performance and as such seek ongoing opportunities to further develop and diversify our craft. As choreographers we are currently investigating the genre of dance-theatre, interdisciplinary collaboration and the integration of humour within contemporary works. Since our inception in 2008 our primary focus has been the commissioning of artists whose work inspires and excites us. Past commissions include Serge Bennathan, Justine Chambers and Rob Kitsos. Last year we were presented by The Society of Yukon Independent Dance Artists, Dancing on the Edge Festival, Dances for a Small Stage, BLiNK, BC Buds Spring Arts Fair, Here Be Monsters, MACC Studio Theatre, and Restless Productions. In 2009 we co-produced the first two installments of Here to Go, a new contemporary dance series, featuring three other emerging companies in Vancouver. In October 2009 we self-produced SUBMERGED, an evening of diverse contemporary dance and video, with the assistance of a partnership from The Roundhouse Community Arts and Recreation Centre, and funding from the British Columbia Arts Council. As individuals, we have also received funding from the Canada Council for the Arts and the Yukon Advanced Artist Award. 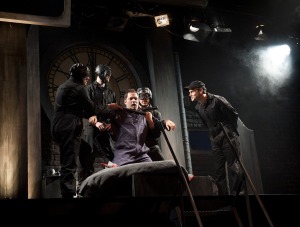 The Virtual Stage is a multi-media theatre production company based
out of Vancouver, British Columbia. The company was founded in the
year 2000, as the Internet was about to explode, with a unique mandate
to investigate emerging technologies in live performance and the
relationship betwen the theatrical and cinematic art forms. While
challenging the traditional border between theatre and film in this
way, with a special focus on exploring how technology can support
storytelling, The Virtual Stage fuses a new script writing form, new
staging practices and a unique developmental process for the stage.
The result is a dynamic, hybrid art form that appeals to contemporary
sensibilities, while attracting a new audience to discover the magic
of live theatre.